Trip to the Aral Sea and around. Part II

In the first part of this post, I put the pictures I shot during my trip to the Aral Sea until the point where we reached the current sea water boundaries in the south-west part. In that post, you were able to see the landscape of the way until Muynak, and some sights in Muynak itself: some shots from the museum dedicated to fishing industry and so-called “cemetery of ships”. Also, you could see the varying landscape of former seabed of Aral and a few shots of the sea waters. In this post, I will continue from the point where I left in the previous one. Particularly, this post will include more shots of the sea water and the landscape around, the amazing canyon-like structures at the edge of Ustyurt plateau, the ancient burials of nomadic people, and the area around Sudochye Lake.

Our driver brought us to the shore of the sea and we could walk into the water up to knee-level. The shore was mud-like surface and we walked with caution not to get slipped and fall into mud or water.

And here is the panoramic video I took when I went inside of water a couple of meters. So far you could see only pictures of the water, but here you have chance to listen to the waves of the sea as well:

Lot’s of sea shells on the shore:

Our driver (and tour guide at the same time) told us that there is a sandy shore around 15 km in the north direction from this spot, however, unfortunately, due to time constraints we could not go there.

Here at the shore we found something interesting. We saw some camping place for a few dozens of people, and we were wondering what they were doing here, provided that there was no derrick tower nearby.

And here is the reason:

What is that? It turns out that a group of Chinese came here and established a mini-farm for collecting Artemia, which can be used as a feed for fish and also used in pharmacy, according to our guide. It is amazing to realise the fact of nature that when ecological condition changes, it provides basis for habitat for other type of creatures. When salinity increased in the sea, most types of fishes died, however, that increase in salinity provided a natural condition for other type of sea creature, artemia to inhabit the sea.

Around 1 km away from the shoreline we could see something like high hills, around 30m higher than the level of the shore. That was an edge of the Ustyurt plateau, and not some mountain range. From that edge if one goes further in the opposite direction from the sea, all the land is at the same hight, i.e. there is no going down. 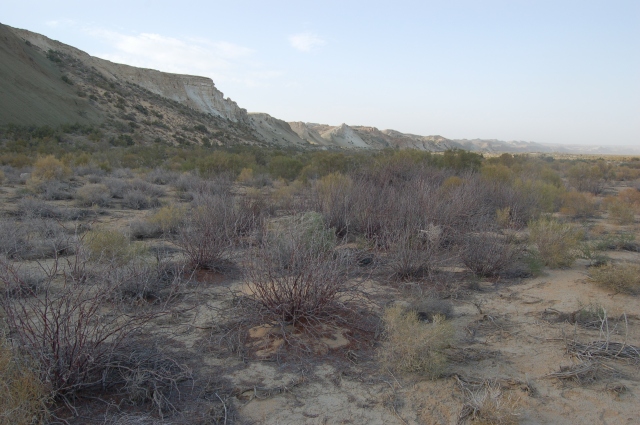 It was already over 6pm when we finished looking around the shore, and we went up the plateau to make camping and have dinner. It turns out that there is a special place for camping over the plateau, where drivers usually stop-by. What makes that place special is that it is surrounded by hills, so that one can enjoy not-so-windy air:

Another group of people appeared after a while who chose the same place for camping as we did:

Our driver who was cook at the same time, as I mentioned before, prepared delicious plov on the fire:

And here are our sleeping tents. It was really cold near the morning:

The edge of Ustyurt plateau: 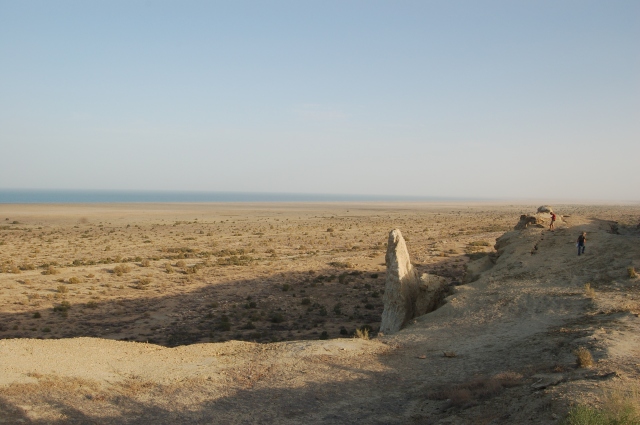 View of the sea from the edge of Ustyurt plateau:

Moon on the rock 🙂 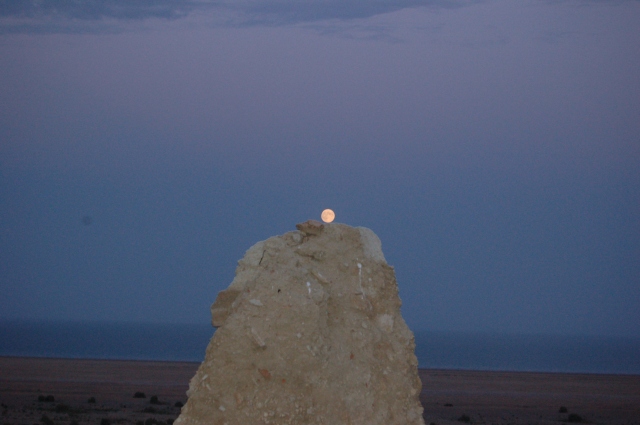 The light beams from the moonlight can be seen over the sea: 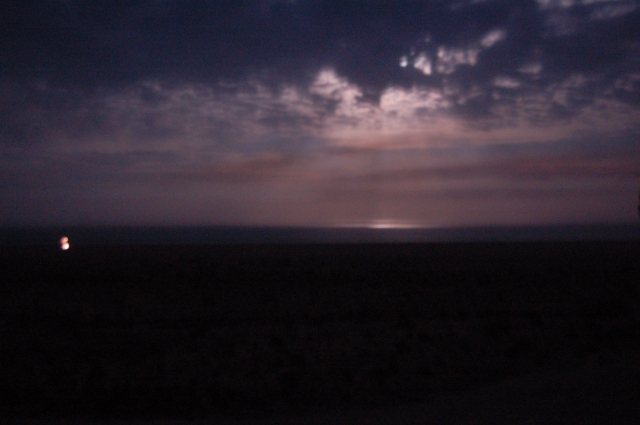 Before sleeping, I asked the tour about what time we can see the sunrise. We were in the very good location to see the sun rising over the sea. After getting to know the approximate time, I set my alarm to 15 minutes before that, so that I wouldn’t miss it for sure.

I woke up from the alarm as expected and was getting ready to shoot the half sun under the water scene 🙂 It was already bright, but the sun did not yet appear: 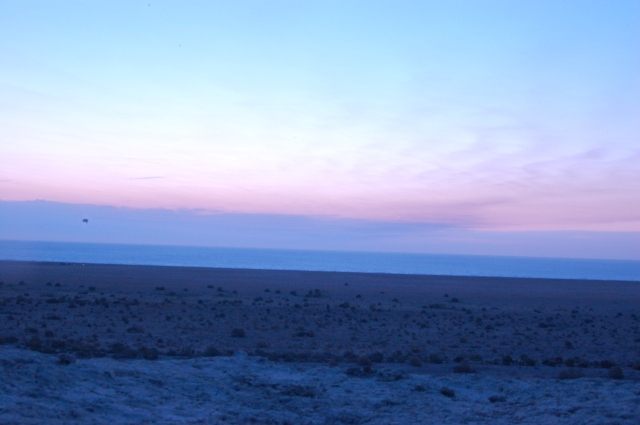 And you know what? The sky on the direction where the sun would appear was covered by the clouds. I was disappointed about that fact, but we can do nothing about that, so I accepted that truth and went on taking other shots: 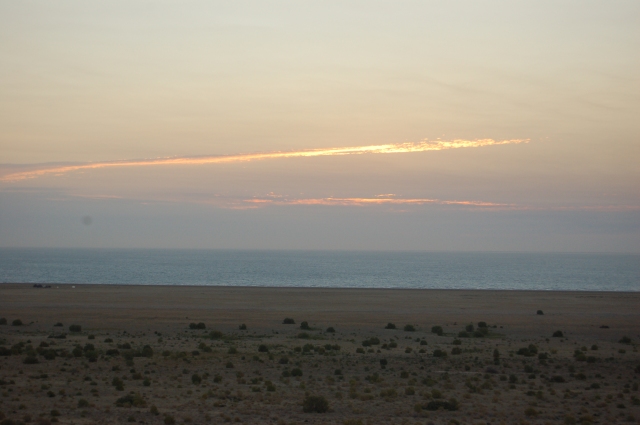 At last the sun appeared over the clouds:

After taking shots, we had breakfast and wrapped up the sleeping tents and continued our tour. The way ahead was the path along the edge of Ustyurt until Sudochye Lake, where we would stop by and have lunch there. As we started driving over the Ustyurt we could see amazing landscapes: 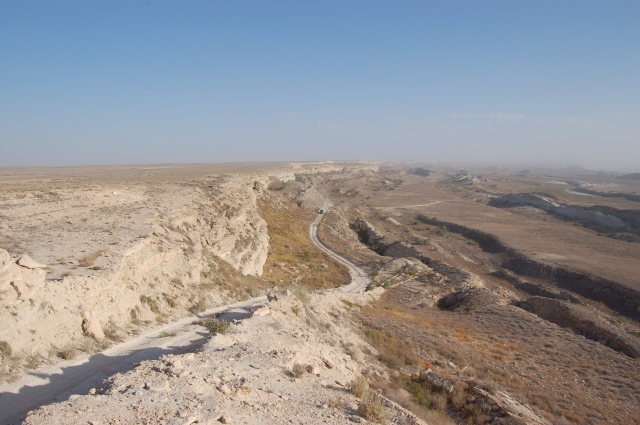 After driving a few dozens of kilometers over the Ustyurt plateau, we saw lots of stones piled up. After coming close, it turned out to be burials of some nomadic tribes: 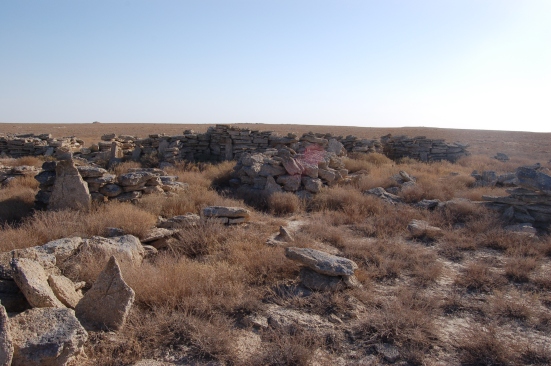 Each grave contains stone plate and some geometrical figures are engraved on the stone surface. We assumed that these figures represent the tribe to which the buried people belong:

These stone shapes and the signs on it in above pictures looked quite primitive. We were initially thinking that this burials could be dated back many centuries. However, we saw this finely engraved script (I guess Arabic?) on well-formed piece of stone, which finely contrasts from all other stones. Maybe these writings could give the answer about the origin of this place. If there is anyone who can read and understand that script among readers of this post, I would be glad if (s)he translates it to English. If the script is Arabic, then it could be written in Karakalpak language as it was based on arabic script until 1928:

Another writing on ordinary stone:

After seeing around these burials, we went on our path and after another dozens of kilometers passed, we could see huge cracks of landmass resembling canyons. Here is it, “Grand Canyons” of Ustyurt: 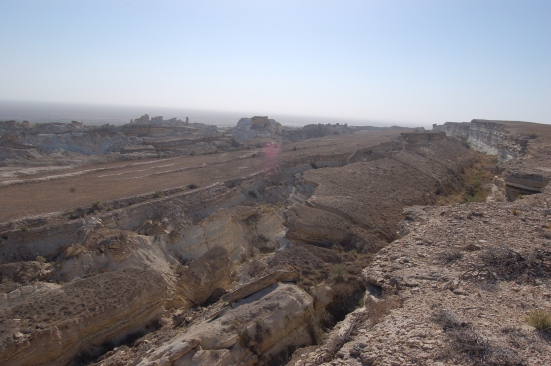 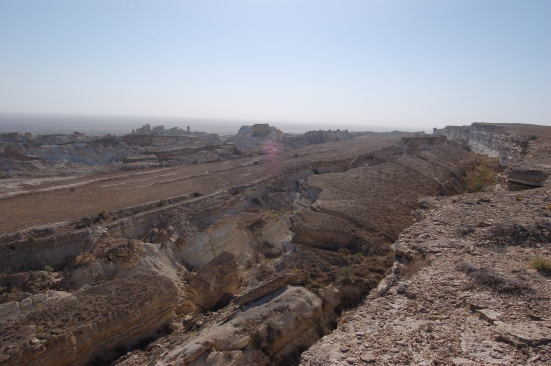 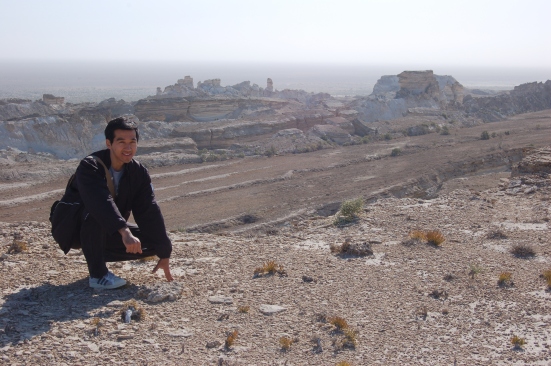 And in another few dozens of kilometers, we came close to Sudochye Lake: 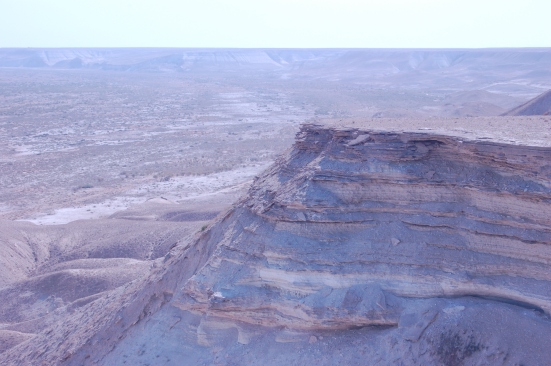 After driving many kilometers of desert-like landscape, Sudochye Lake appeared as an oasis in the middle of desert. The word “Sudochye”, as our driver told, originated from the expression “Suw dushshi”, which means “fresh water” in Karakalpak. It turns out that besides huge salty Aral sea there was a fresh water basin which is also supplied with water from Amudarya. Even though the biodiversity is in catastrophic condition in big Aral itself, here in Sudochye there are many types of fishes inhabiting this lake. The importance of this lake to this region cannot be underestimated, and big attention is directed towards saving the biodiversity in Sudochye and around.  According to our driver, there is a fish specie called Sander (судак in Russian, or сыла in Karakalpak) that inhabits in Sudochye that can live in only freshwater. And as far as Sander fish can inhabit the Lake, we can be sure that the salinity of that lake is in normal range, i.e. otherwise if salinity increased, Sander fish would just die: 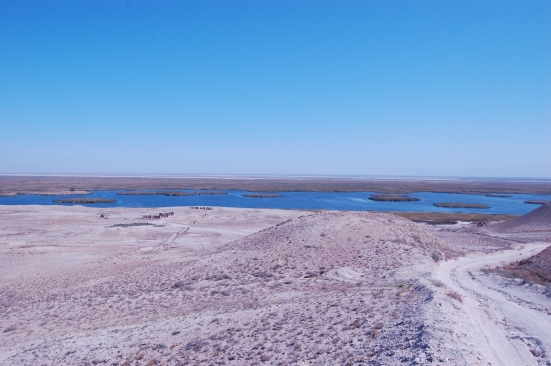 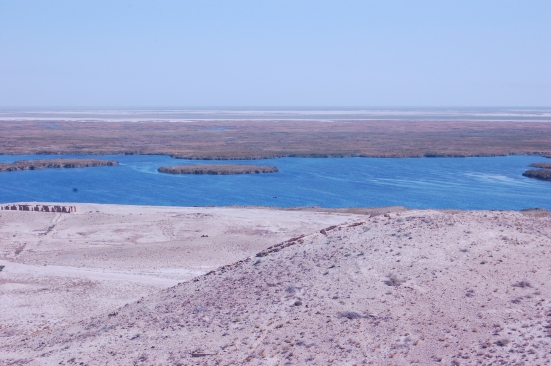 In these pictures we can notice some abandoned houses, probably quite long time ago. As our driver told, a Gulag camp was located here and these people lived in those houses. That was surprising for me, as I did not know about that fact before. Gulag is a government administration of Soviet forced labor camp operated from 1930 to 1960 for political prisoners and other criminals. Those people probably made living here mainly by fishing in Sudochye. 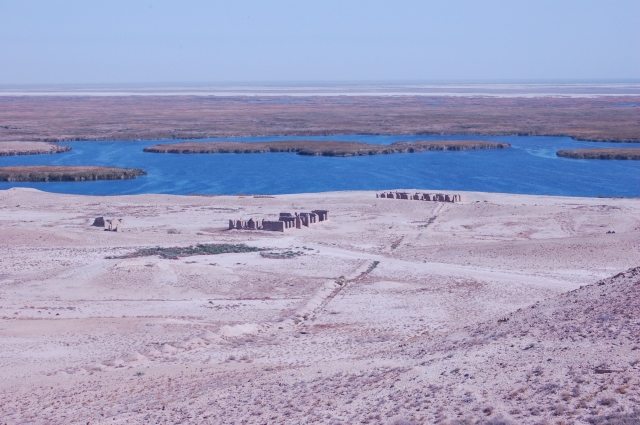 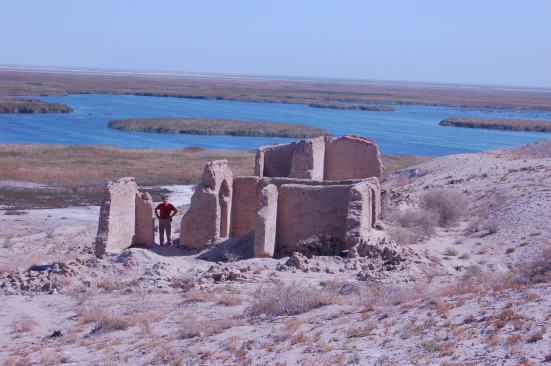 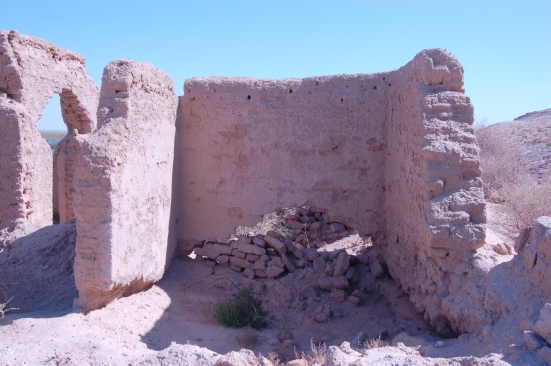 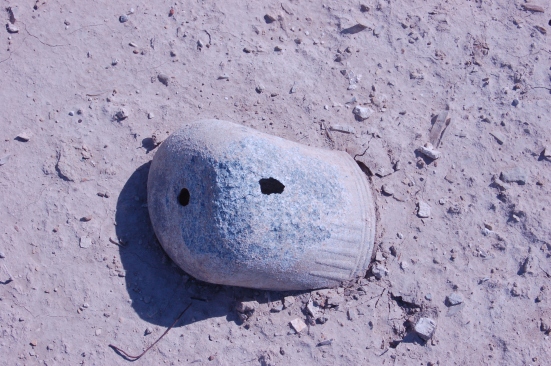 Not that far away from those houses, we found some cemetery of that community who lived in that camp. We can notice that they belong to some branch of Christianity from the crosses over the burials. The cross shape is a variation of the generic Christian cross, and after googling I found that it is Orthodox Cross:

After going around that place we went down close to the Lake and had some meal there. It turns out that a group of around 10 people regularly comes here for fishing. And we had fried fish for lunch prepared by those fishermen from freshly caught fish from the Lake: 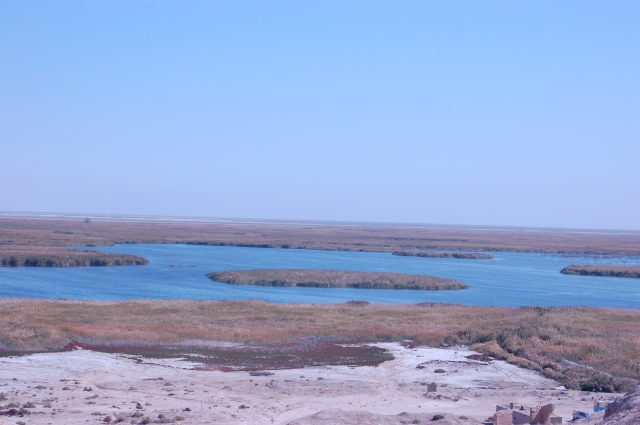 After finishing our lunch we went on our tour, and on the way we saw this structure. According to our driver, it was lighthouse that assisted the ships for navigation in this area. He told us that in the past periodically Aral and Sudochye used to be connected when water levels rise. And at those times, the ships from Aral could easily come to Sudochye:

And some shots from the top of that former lighthouse: 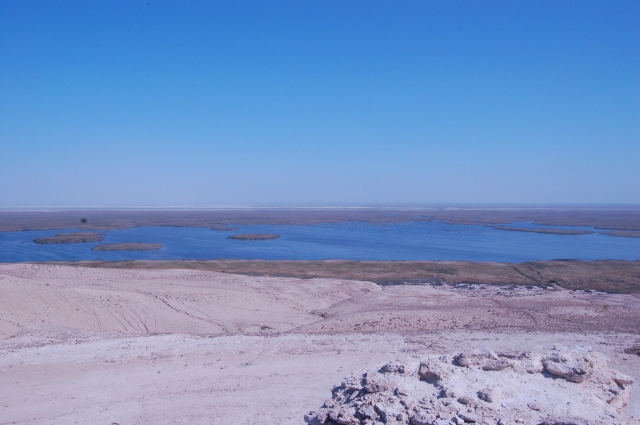 The other side, my fellow travellers:

Here we can see the water channel that is coming from Amudarya and supplying Sudochye:

After that we went down from Ustyurt plateau and headed back home.

This trip was very interesting, informative and exciting for me. One can realize that the Aral Sea has very complex nature and not a conventional sea. It is essential to point that Karakalpakstan is not just place covered mostly by plain boring deserts, but with a lot of interesting locations with unique history.

Like Loading...
This entry was posted in Aral Sea, English, Karakalpakstan, Travel and tagged Ustyurt plateau. Bookmark the permalink.

4 Responses to Trip to the Aral Sea and around. Part II